Intel® SGX is a new set of instructions from Intel available on Skylake and newer generations of CPUs. Intel® SGX allows applications to run securely and privately without trusting the underlying OS and infrastructure. 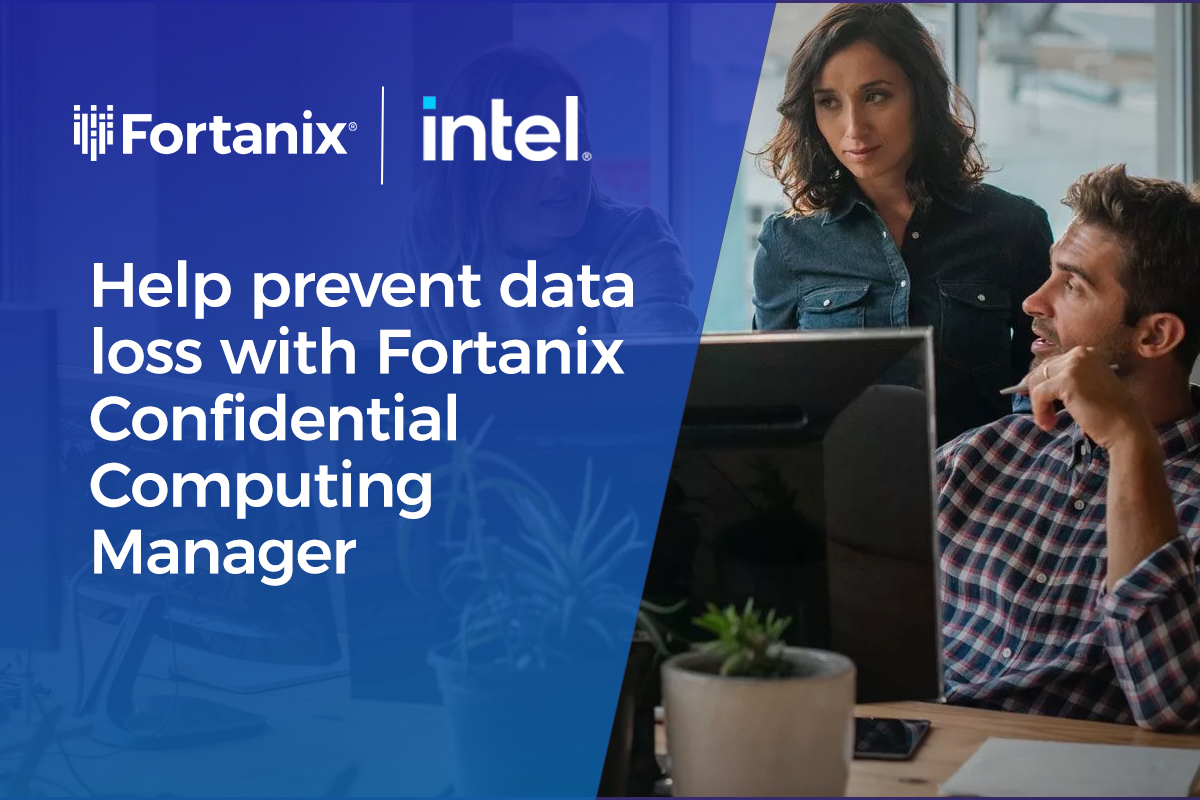 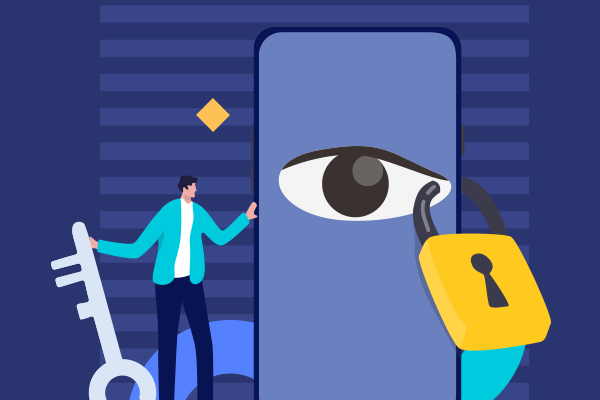 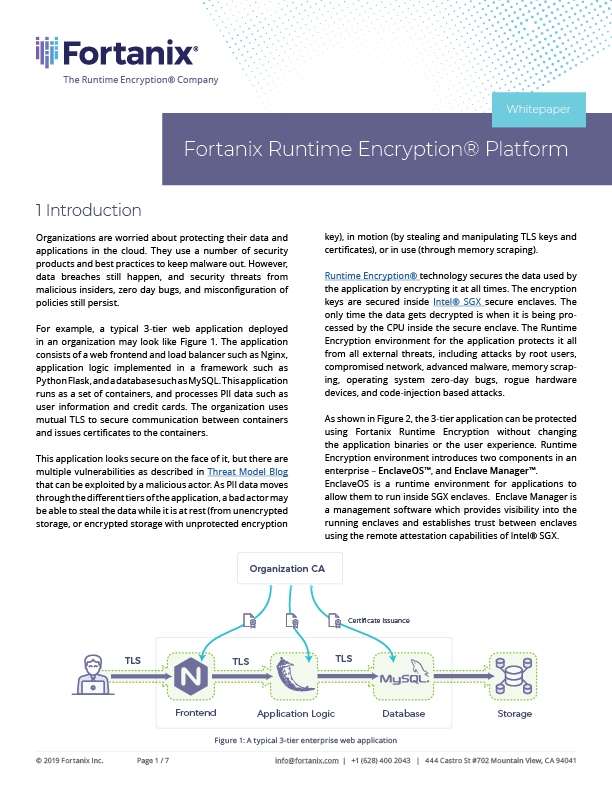 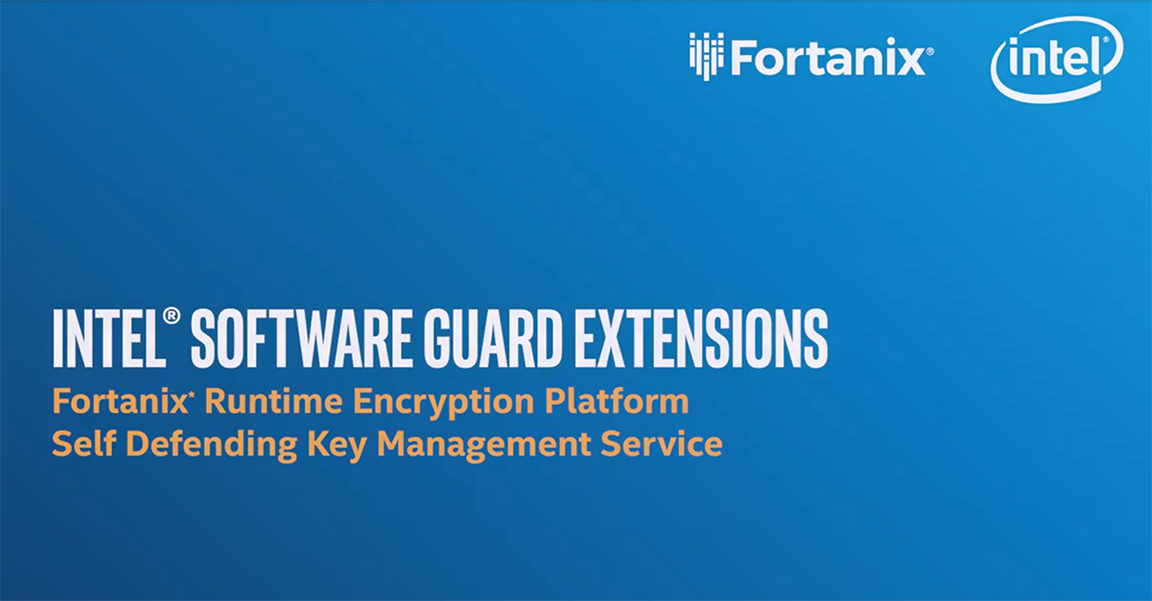 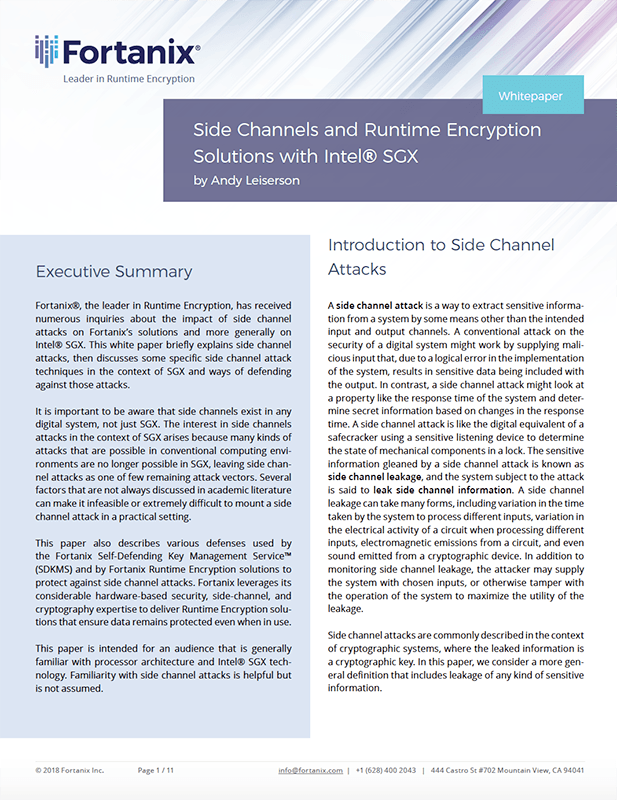 Whitepaper
Side Channels and Runtime Encryption® Solutions with Intel® SGX 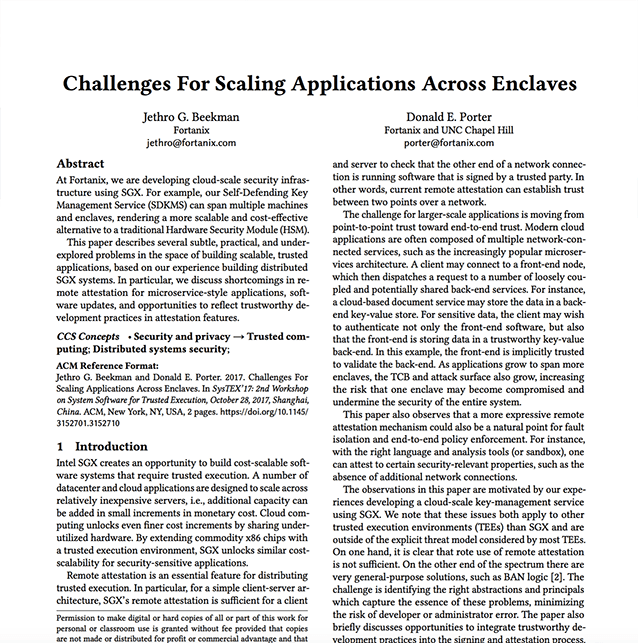 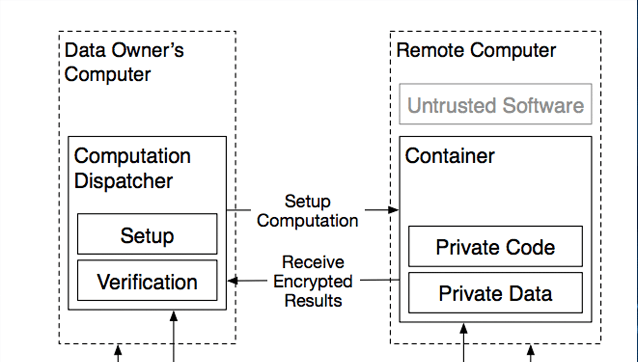 Intel® SGX is an extension to the x86 architecture that allows running applications in completely isolated secure enclaves. Intel® SGX applications are isolated from other applications running on the same system, but also from the operating system, the hypervisor, the system management module as well as the BIOS, and the firmware. The memory of secure enclaves is also encrypted to thwart physical attacks. These security guarantees prevent even system administrators with physical access to the SGX nodes from tampering with the application once it is started. Intel® SGX supports data sealing which allows enclaves to persist data securely such that the data can only be read by the enclave. Through remote attestation, Intel® SGX enables third parties to verify that an application is indeed running inside an enclave and the application has not been tampered with.

Intel® SGX is based on hardware-enforced memory isolation built into the processor itself along with strong cryptography. The processor tracks which parts of memory belong to which enclave, and ensures that only enclaves can access their own memory.

Data associated with an enclave is stored in a special area in RAM called the Processor Reserved Memory (PRM). The CPU controls access to the PRM and prevents access from unauthorized entities. The PRM holds, among other things, the Enclave Page Cache (EPC) where enclave pages are stored. These pages are only accessible by the enclave they belong to and they are kept encrypted when stored in RAM. When an enclave page is loaded to the CPU package, the Memory Encryption Engine (MEE) transparently decrypts the page.

In some cases, enclaves need to persist their state to untrusted storage devices to make it available across enclave invocations. To achieve this, an enclave can encrypt (seal) data using a sealing key and safely store the data on disk. When sealing data, one of two available identities needs to be selected. The “enclave identity” specifies that the sealed data can only be decrypted by that very same enclave. The “signer identity” specifies that the sealed data can be decrypted by any enclave signed by the same user.

Intel® SGX enclaves can be instantiated in nodes that are provisioned and managed by a third-party (untrusted) vendor. A party that wishes to deploy some software inside an enclave on such an untrusted node can use remote attestation to verify that their software is indeed deployed within an enclave and the software has not been tampered with. Once an enclave attests itself to the user of the enclave, a secure channel can be established between the two, through which secret keys and sensitive information can be provisioned.

A number of side-channel attacks have been brought forward that allow local attackers to read the memory of other processes on the same system, including the memory of hypervisors, operating system kernels, system management code, and SGX enclaves. These attacks can be classified into multiple categories. The controlled channel attacks category captures attacks that utilize the untrusted OS’s control over system events such as context switches, memory accesses, TLB flushes, interrupts, and page faults to extract side-channel information. Examples of such attacks include SGX-Step, Nemesis, and Off-Limits. The cache-attacks category refers to attacks that exploit the caching of memory loads from the main memory that leave effects in the system state which are measurable from outside an enclave application. Example attacks in this category include CacheQuote, Malware Guard Extensions, Software Grand Exposure, and MemJam. Branch prediction attacks exploit the fine-grain control flow of running SGX applications by shadowing the branch prediction unit. Example attacks that fall in this category include BranchScope, Bluethunder, and Branch Shadowing. Speculative execution attacks work by mispredicting branches and executing code, that would otherwise not have been executed, in a speculative manner. Example attacks include Spectre, SgxPectre, and SpectreRSB. The transient data cache load category refers to attacks such as Meltdown and Foreshadow that abuse memory accesses that are transiently available due to out-of-order execution of instructions, even if these instructions are later rolled back. Microarchitectural data sampling attacks include CacheOut, CrossTalk, ZombieLoad, and SGAxe and work by exposing information from intermediary buffers of the targeted microarchitecture. Fault injection attacks oftentimes work by dynamically altering the CPU frequency or voltage with the goal of corrupting the computation of enclave applications. Attacks that fall in this category include Plundervolt.

Intel® SGX was designed with the ability to mitigate any attacks that might arise in the future (renewability) through its TCB Recovery process. In general, attack mitigations and security fixes come in four different forms:

Fortanix has applied the microcode updates supplied by Intel® and has disabled hyperthreading on all systems. This prevents unauthorized access to the memory of SGX enclaves through side-channel attacks such as the Foreshadow vulnerability. In addition, Fortanix uses widely-known side-channel countermeasures such as “constant-time” code and blinding. For more details on side-channel vulnerabilities, please see our whitepaper.

Intel® SGX allows you to run applications in a confidential and integrity preserving manner on untrusted infrastructure (for example public clouds) without having to trust the infrastructure provider with access to your applications. Example use cases include building ML models and performing data classification, hosting database services, performing data analytics, deploying middleware services such as load balancing, setting up key management services, and many more. See our public container registry for example applications and our support pages on how to deploy these applications.

Major vendors such as ASUS, Dell, Lenovo, HP, SuperMicro, and Intel® support SGX in the BIOS of some systems. Check with your supplier if your specific model has BIOS support for SGX, or use the sgx-detect tool to verify support for Intel® SGX.

Most Desktop, Mobile (6th generation Core and up), and low-end Server processors (Xeon E3 v5 and up) released since Fall 2015 support SGX. BIOS support is also required. Major vendors such as Lenovo, HP, SuperMicro, and Intel® support SGX in the BIOS of some systems. Check with your supplier if your specific model has BIOS support for SGX.

Trusted boot relies on measuring the entire software stack from bootloader to hypervisor to operating system. This theoretically allows you to know exactly which software is running on the system if you're able to compare it to an equivalent reference software stack. Importantly, it does not change the security model of the software stack. A root user still has the same privileges as before, and applications are not isolated from the underlying computing layers.

AMD SME/SEV encrypts a virtual machine's memory from the perspective of the hypervisor. It doesn't otherwise impose isolation between the VM and the hypervisor or between the applications and the OS. While the hypervisor can only see encrypted memory, it can still modify the memory, leaving open an avenue of attack. Also, a root user inside the VM still has the same privileges as before, and applications are not isolated from the underlying computing layers.

To develop applications that utilize Intel® SGX, Intel® provides the Intel® SGX SDK, which supports applications written in C or C++. Alternatively, the Enclave Development Platform, is an open-source SDK provided by Fortanix that enables the development of secure SGX applications in Rust. Developing enclave applications using EDP offers a number of benefits:

The Fortanix Confidential Computing Manager (CCM) automates the process of attesting, deploying, and managing enclave applications throughout their lifecycle. Upon successfully attesting an application, CCM issues a TLS certificate to the application that can be used to establish a secure communication channel with other parties. CCM provides ways of synthesizing applications into workflows and enforces policies controlling how the applications are deployed.